Erica Sumeragi (エリカ・スメラギ Erika Sumeragi) is the female lead of the series, and one of the playable characters of the Hero's Party in the JRPG game Brave Hearts.

She has black hair that extends towards her shoulders, and usually wear a hairpin with a pink undertone and a long-sleeved kimono. Her beauty is greatly reflected within the story, as many people have tried courting her during conventional events and parties alike. 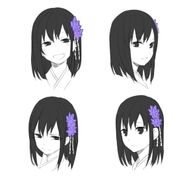 In the game, Brave Hearts, Erica is a mature and kind person to the point of praying and feeling sympathy for her enemy (including monsters in the game), but despite her great kindness and sympathy, she may be able to hide her pain and feelings by showing a calm or poker expression. Even if she is in a critical situation, she will act like an adult and maintain her composure.

She is described in the game as the embodiment of goodness or peace.

Even being overly mature and kind, she has a deep hatred for Harold to the point of mercilessly slapping him at one point in the game. Kazuki, when he remembers this he wonders, what would Harold have done to make Erika hate him to that point?

In the events of the story, she also slapped him for the same reason she did in the game. This was all related to the incident in which Harold killed his servant, Clara Ameller, due to a slight mishap during her duties. However, unlike in the game where he actually kills her, during the events of the story he ends of contradicting the script and saved her instead. After Erica found out, through the help of Zen, that his harshness and indifference was all a facade to make everyone believe he killed his servant, when he actually saved her so as to not draw unnecessary attention and for them, Clara and her daughter, to be found out as a result. Afterwards, her opinion of him drastically changed and additionally due to the help he provided which ultimately saved her family from ruin she eventually fell in love with him.

As a member of the Hero's Party, she is quite proficient in a variety of spells since she was essentially the rearguard and support character of the party.

Community content is available under CC-BY-SA unless otherwise noted.
Advertisement