Harold Stokes (ハロルド・ストークス Harorudo Sutōkusu) is the protagonist of the series, and one of the recurring antagonists in the JRPG game Brave Hearts. He is currently possessed by Kazuki Hirasawa, an ordinary university student from Japan.

Harold has glossy black hair and red pupils. His face has the features found on people outside Japan and non-Asians. At age 10, he's roughly 140cm in height.

At the beginning of the story, he's often dressed in a pure white shirt with a cross-tie and knee-high half-pants. He's been described to be having the appearance which was exactly like a painting of a young boy coming from a distinguished and noble family. 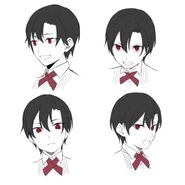 In Brave Hearts, Harold is a ruthless and selfish person, with no regards for human lives, especially commoners, much like his parents. He is described to be heinous and arrogant, and a sore loser, as he repeatedly challenges the hero party despite getting defeated by them all three times. He is famously known for his foul mouth and his not very subtle superiority complex. Seeing most people as trash below himself.

However ever since Kazuki took over his body. His personality obviously changes due to him. Every foul thing, that the original Harold, would have done, instead turned into acts of kindness and compassion in accordance to Kazuki's good will. Though Harold's foul mouth was still present, much to his chagrin.

Despite his claims that everything he does was in order to avoid the appalling "Death Flag", he willingly helped others knowing that the ultimate future he knows of the game would be altered, further increasing the amount of uncertainties he had to face. First, he saved Clara Ameller, the maid the real Harold ended up killing on a whim. This event ends up altering the future of not only her but most importantly her daughter Collette, a future member of the Hero's Party. However he still had to relay the fact the he killed her and her daughter even though he didn't so as to not arouse suspicion from his family. Due to this he has been thought of in disdain and hatred by many. Even so he didn't care about what others thought of him as long as he was able to save someone.

His selfless nature was further emphasized when he saved the Sumeragi by providing them an antidote to the disease caused by the miasma affecting their territory. In addition to that he also gave them the LP (Life Potion) Farming Method which drastically turned their fortunes around due to its revolutionary innovation. This saved countless lives in their territory and made them greatly indebted to him. But for all of this to take effect he would need Tasuku, the head of the Sumeragi, to annul his engagement to Erica. The engagement was nothing but a political one since the Sumeragi family required support due to the problems they were facing, but now that there problems were almost nil, Harold requested for the annulment of the engagement. Moreover he made Erica hate him as much as possible by admitting to be guilty of the killing of his servant, although she later finds out that it was all a pretense. He didn't want her to be another flag which would bring his demise but his ulterior motive can be inferred to prevent her from marrying someone she isn't in love with and also most importantly for her to join up with the Hero's Party without any deviations from the game.

As one of the bosses who repeatedly faced the hero party, Harold is immensely power, and in terms of pure stats is even better than the playable character - i.e. the heroes etc. He is only matched by strong boss characters on the level of Vincent - which means except for the final boss, there is no one stronger than him.

In the novels, he has shown to far surpass his game counterpart - though the special state he had gone through is still a little debatable (he has likely surpassed that as well).

Currently in the novel, he is the strongest character, though the final boss is still far stronger than him.

Community content is available under CC-BY-SA unless otherwise noted.
Advertisement